When Cancer Strikes, and You Live in Nunavut 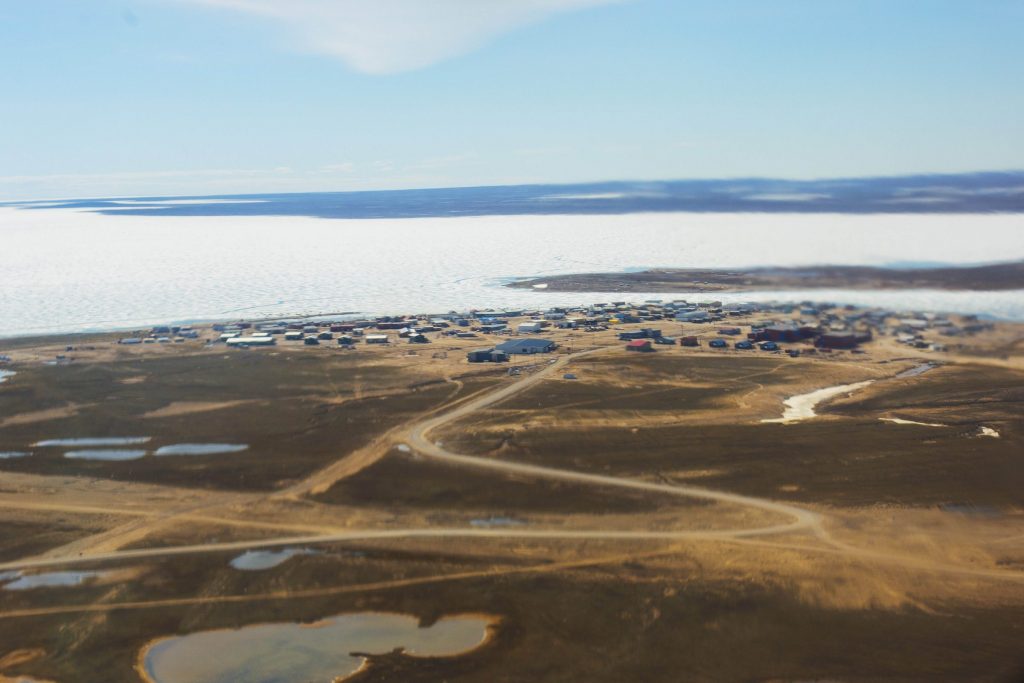 You find a lump in your breast. You visit your family doctor the next week. She refers you to the Princess Margaret Cancer Centre. On the subway there, you worry about your health, of course, about taking two afternoons off work, and that you might be later than usual picking your daughter up from daycare.

Let’s do that again. You find a lump in your breast. You ask the nurse at the community nursing station to make an appointment for when the doctor next flies in – three weeks from now. On that day, the doctor suggests a more thorough investigation. It has to take place where the technology and specialists are – in Ottawa – 3,000 kilometres away. There’s a short flight from your small Baffin Island community to Iqaluit, then a longer flight to the nation’s capital. If the flights connect well, you won’t have to spend the night en route, and it will take only one full day to get there. You are allowed to bring a medical travel escort, and you want it to be your sister, but can your mom really look after both sets of kids for the week or more that the two of you will be away? Your husband is out on the land. Should you just go on your own? What if the diagnosis is bad, or complicated? Can you handle that without someone nearby to support you?

Health care in Canada’s north is different from health care in the south. When the care revolves around a serious condition, such as cancer, it is very different indeed.

Tracey Galloway, an assistant professor of anthropology at U of T Mississauga, and her co-investigator, Gwen Healey Akearok, executive and scientific director of the Qaujigiartiit Health Research Centre, based in Iqaluit, have spent the last three years studying how Nunavummiut – the people of Nunavut – experience cancer and end-of-life care. The research project was initiated after reports from patients and health-care providers made it clear that more information was needed. The researchers and community partners set out to understand experiences of cancer from the perspectives of patients, family members, cancer survivors and health-care providers.

Separation is a big part of the health-care experience in the Far North. Galloway says she thinks of separation in terms of both distance and time: “Patients are not only a long way away from family, they are days away from that hug or from sitting together on the couch dealing with the news.” (University of Toronto Magazine did not interview any patients for this article due to research ethics protocols and privacy issues.)

Nunavut’s population of 38,000 live in 25 communities that span three time zones. People in the western region, Kitikmeot, fly to Yellowknife for cancer diagnosis and treatment. People in the central region, Kivalliq, fly to Winnipeg, and those in the easternmost region, Qikiqtaaluk, fly to Ottawa. Diagnosis can take several weeks. If chemotherapy is required, patients have to fly back down for it, often for six weeks at a time. During their time in the south, they live in “boarding homes” – special hostels for northern medical patients.

Being so far from home can be extremely stressful, says Susie Pearce, a nurse manager who has practised in Nunavut for 13 years. “Being down south, even if you’re not sick, can really feel isolating,” she says. For those with memories of other separations, it can be even worse, says Galloway: “It is not difficult to see how these experiences could evoke troubling memories for people who as children endured forced relocations for residential school or tuberculosis treatment.”

Cancer is the leading cause of death in Nunavut, according to a 10-year study carried out by the territorial government, with lung, colorectal and breast cancers most prevalent. Women with the disease outnumber men; female rates in the north exceed the national rate by 30 per cent. This means that the people travelling south and back are often women. “They are separated from their children, their sisters,” says Galloway. “They are out of the home and unable to work or care for others.” It is common for homes and families in Nunavut to be without the women who normally tend to them, she says.

The team conducted in-depth interviews with 10 families and 17 health-care providers. They heard that families were happy with the way knowledgeable medical teams (which included community members and interpreters) would come into a family’s home and help patients make decisions there, surrounded by the people they love. They also heard about how home-care nurses worked hard to make cultural practices part of the care they provide, by, for instance, making sure patients have traditional foods that bring both nutrition and comfort.

But there are challenges, too. Sometimes, when health providers are on short-term contracts, they don’t adequately understand Inuit culture or traditional practices. They may not understand the prominent role that family plays in care and decision-making, the need for the Inuit language or the cultural importance of showing hospitality, even when you’re very ill. “Investments made in training new and temporary health-care service providers can really make a difference,” says Galloway.

Sometimes continuity of care is compromised by fly-in, fly-out health-care providers, families reported. Healey Akearok recalls an incident where a patient had decided to return home to Nunavut to die. When the patient went into crisis, however, a nurse ordered an emergency air evacuation to a regional hospital. The patient died in transit. This was in stark contrast to the patient’s clearly articulated wishes. “These are the stories brought to us,” says Healey Akearok, “and they fuel our desire to go to the next stage, to translate them into something useful.”

There were also concerns raised about experiences in the south. The meals in the southern centres often did not include familiar traditional foods, such as Arctic char, caribou, seal and berries. One person mentioned that raw meat was necessary in order to feel well. Not surprisingly, people feel best when eating the kind of food that connects them to their community, says Galloway. “We have flights every day from territories down to referral cities,” she says. “There’s no reason we can’t be moving traditional food to support people there. That seems like an achievable goal.”

Patients expressed a strong desire to communicate in their own language. Good translation is important, says Galloway, especially at critical times, such as during diagnosis or decisions around care. “You’ve got to have those conversations in your own language,” she says.

Communication between medical experts in the north and south could also be improved. Patients need to return to their community with clear care plans: what the expectations are for northern health service providers and when they need to call the south. And southern practitioners need to be aware of – and respect – the decisions made back in the northern community, in the comfort of home, with the support of family. Community-informed care is important, stresses Galloway. “Sometimes physicians will fly in, sit down and take a couple of hours with a family to develop an advanced care directive plan,” she says. (This is a carefully thought-out plan meant to guide all end-of-life care). But occasionally in the hustle and bustle, it gets lost, ignored or missed in the handover between care providers. “There’s concern that the plan is not following patients to southern referral centres.”

The three-year research project wrapped up in March and the team is now working to share what they have learned. This has meant everything from meeting with Nunavut’s department of health and presenting rounds at the hospital in Iqaluit, to doing telehealth sessions for local health-care providers across the territory, says Healey Akearok. “We want to translate these findings into action,” she says. Future plans include sharing what was learned with care teams in southern referral hospitals in Edmonton, Winnipeg and Ottawa.

“Patients are not asking to live longer than those in the south do – they are not even asking to be on par,” says Galloway. “They want respectful care in their own language, and care that recognizes that these are Inuit families.”